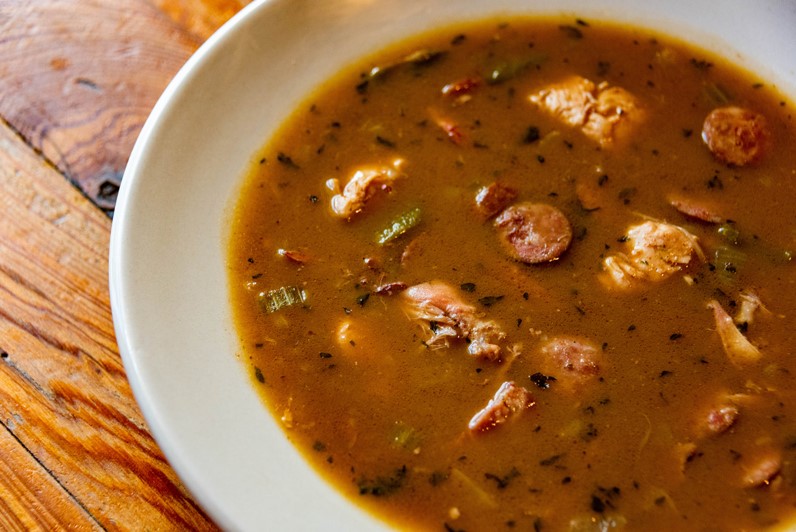 Gumbo is a stew or soup originating in Louisiana and found across the Gulf Coast of the United States and into the U.S South. It consists primarily of a strong stock, meat and or shellfish, a thickener, and the vegetable “holy trinity” of celery, bell peppers, and onion. Gumbo is traditionally served over rice, and it is eaten year-round but is usually prepared during the colder months.

A typical gumbo contains one or more kinds of poultry, shellfish, and smoked pork. Poultry used is typically chicken, duck, or quail. Local shellfish such as the freshwater crawfish, crab, and shrimp from the Gulf of Mexico are frequently used. Tasso and andouille provide a smoky flavor to the dish.

Gumbos can be broadly divided between the use of okra as a thickener and recipes using file’ powder in that role. Roux may be added to either, and nowadays it is quite common for the roux to be the sole thickening agent itself. Mixing okra and file’ is uncommon in Louisiana.

Another division in types of gumbo is between Creole and Cajun styles. Creole gumbos generally use a lighter (but still medium-brown) roux and may include tomatoes, while Cajun gumbos are made with a darker roux and never contain tomatoes.

Gumbo has been called the greatest contribution of Louisiana kitchens to American cuisine. The dish has its origins in the meeting of cultures that occurred in Louisiana during the 18th century. French cooking techniques provided the beginning with bouillabaisse. The native Choctaw’s file’ powder and local seafood were a major addition to the local cuisine. West African slaves’ imported okra found its way into the Louisiana’s kitchens and provided gumbo with its name. Bell peppers, tomatoes, and cooked onions were brought to the table by Spanish colonists.

Gumbos can be broadly divided into three categories: those thickened with okra, those thickened with file’ powder, and those thickened exclusively with a roux. Modern recipes of both okra and file’ categories generally call for a dark roux that provides additional thickening and flavoring. Okra and file’ powder is, or at least historically, not used together in the same dish. You may, however, see a lighter roux combined with roped (sautéed plain to remove the “stringy” effect) okra and topped with file’ after cooking for the sweet flavor.

The traditional practice of using okra in the summer (in season) and file’ in the winter has played a role in defining the kinds of gumbo usually associated with each. These associations are not hard and fast rules, but more of a general guide. For example, a seafood gumbo is usually not thickened with file’, while one that is purely meat and game would usually not have okra. This reflects traditional practices of fishing and crabbing in warmer weather and hunting and butchering in cooler weather.

The rice is nearly always plain white rice or parboiled rice, steamed or boiled with only salt. The rice used with gumbo is long-grained rice that sticks well to itself and does not disperse in the gumbo.

The ratio of gumbo to rice is also a point of contention. Some prefer “damp rice,” and some only add a minimal amount of rice to a bowl. This is strictly personal taste.
Traditional side dishes include potato salad, fresh New Orleans style French bread, crackers, or baked sweet potatoes. Some Cajuns add potato salad to their gumbo and eat it with or without rice.