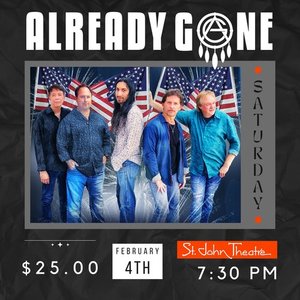 Already Gone is a rock band from Houston, TX, known for being the premier Eagles tribute band in the South. Formed in 2006, these five veteran musicians produce the Eagles’ lush vocal harmonies so accurately that it’s uncanny. They don’t dress like the Eagles, speak like them, or act like them – rather, they give tribute to one of the greatest classic rock acts in history by their painstaking attention to the musical details. Their lead vocalist has the amazing ability to sound incredibly like either Don Henley, Glenn Frey, or Joe Walsh, as evidenced by his performances on Hotel California, Take It Easy, and Rocky Mountain Way, respectively, and his note-for-note delivery of Randy Meisner’s Take It To The Limit is nothing short of impressive, especially since it’s performed in the original key! Capturing the energy and subtle swagger of the early Eagles perfectly, the band paces the delivery of pitch-perfect harmonies and intricate musical arrangements between witty stage patter, reminding electrified audiences once again why the Eagles are legend, and why Already Gone is at the top of its game.The current band features Reserve-native Gus Bourgeois on bass and Garyville percussion dynamo, Leroy St. Pierre. The concert is sure to turn into a rocking hometown affair!